From the outset, von Neumann knew that game theory would prove invaluable to economists. He teamed up with Oskar Morgenstern, an Austrian economist at Princeton, to develop his theory. Their book, theory of games and economic behavior, revolutionized the field of economics.

Born in Budapest, Hungary, in 1903, Von Neumann distinguished himself from his peers in childhood for having a photographic memory, being able to memorize and recite back a page out of a phone book in a few minutes. Science, history, and psychology were among his many interests; he succeeded in every academic subject in school.

He published his first mathematical paper in collaboration with his tutor at the age of eighteen and resolved to study mathematics in college. He enrolled in the University of Budapest in 1921, and over the next few years attended the University of Berlin and the Swiss Federal Institute of Technology in Zurich as well. By 1926, he received his Ph.D. in mathematics with minors in physics and chemistry.

By his mid-twenties, von Neumann was known as a young mathematical genius and his fame had spread worldwide in the academic community. In 1929, he was offered a job at Princeton. Upon marrying his fiancee, Mariette, Neumann moved to the U.S. (Agnostic most of his life, Von Neumann accepted his wife’s Catholic faith for the marriage, though not taking it very seriously.)

In 1935, Mariette gave birth to Von Neumann’s daughter, Marina. Two years later, Mariette left Von Neumann for J. B. Kuper, a physicist. Within a year of his divorce, Von Neumann began an affair with Klara Dan, his childhood sweetheart, who was willing to leave her husband for him.

Von Neumann is commonly described as a practical joker and always the life of the party. John and Klara held a party every week or so, creating a kind of salon at their house. Von Neumann used his phenomenal memory to compile an immense library of jokes which he used to liven up a conversation. Von Neumann loved games and toys, which probably contributed in great part to his work in Game Theory.

An occasional heavy drinker, Von Neumann was an aggressive and reckless driver, supposedly totaling a car every year or so. According to William Poundstone’s Prisoner’s Dilemma, “an intersection in Princeton was nicknamed “Von Neumann Corner” for all the auto accidents he had there.” (p.25)

His colleagues found it “disconcerting” that upon entering an office where a pretty secretary worked, von Neumann habitually would “bend way over, more or less trying to look up her dress.” (Steve J. Heims, John Von Neumann, and Norbert Wiener: From Mathematics to the Technologies of Life and Death, 1980, quoted in Prisoner’s Dilemma, p.26) Some secretaries were so bothered by Von Neumann that they put cardboard partitions at the front of their desks to block his view.

Despite his personality quirks, no one could dispute that Von Neumann was brilliant. Beginning in 1927, Von Neumann applied new mathematical methods to quantum theory. His work was instrumental in subsequent “philosophical” interpretations of the theory.

For Von Neumann, the inspiration for game theory was poker, a game he played occasionally and not terribly well. Von Neumann realized that poker was not guided by probability theory alone, as an unfortunate player who would use only probability theory would find out. Von Neumann wanted to formalize the idea of “bluffing,” a strategy that is meant to deceive the other players and hide information from them.

In his 1928 article, “Theory of Parlor Games,” Von Neumann first approached the discussion of game theory and proved the famous Minimax theorem. From the outset, Von Neumann knew that game theory would prove invaluable to economists. He teamed up with Oskar Morgenstern, an Austrian economist at Princeton, to develop his theory.

Their book, Theory of Games and Economic Behavior revolutionized the field of economics. Although the work itself was intended solely for economists, its applications to psychology, sociology, politics, warfare, recreational games, and many other fields soon became apparent.

Although Von Neumann appreciated Game Theory’s applications to economics, he was most interested in applying his methods to politics and warfare, perhaps stemming from his favorite childhood game, Kriegspiel, a chess-like military simulation. He used his methods to model the Cold War interaction between the U.S. and the USSR, viewing them as two players in a zero-sum game.

From the very beginning of World War II, Von Neumann was confident of the Allies’ victory. He sketched out a mathematical model of the conflict from which he deduced that the Allies would win, applying some of the methods of game theory to his predictions.

In 1943, Von Neumann was invited to work on the Manhattan Project. Von Neumann did crucial calculations on the implosion design of the atomic bomb, allowing for a more efficient, and more deadly, weapon. Von Neumann’s mathematical models were also used to plan out the path the bombers carrying the bombs would take to minimize their chances of being shot down. The mathematician helped select the location in Japan to bomb. Among the potential targets he examined were Kyoto, Yokohama, and Kokura.

“Of all of Von Neumann’s postwar work, his development of the digital computer looms the largest today.” (Poundstone 76) After examining the Army’s ENIAC during the war, Von Neumann came up with ideas for a better computer, using his mathematical abilities to improve the computer’s logic design. Once the war had ended, the U.S. Navy and other sources provided funds for Von Neumann’s machine, which he claimed would be able to accurately predict weather patterns.

Capable of 2,000 operations a second, the computer did not predict weather very well but became quite useful doing a set of calculations necessary for the design of the hydrogen bomb. Von Neumann is also credited with coming up with the idea of basing computer calculations on binary numbers, having programs stored in computer’s memory in coded form as opposed to punchcards, and several other crucial developments. Von Neumann’s wife, Klara, became one of the first computer programmers.

In 1948, Von Neumann became a consultant for the RAND Corporation. RAND (Research ANd Development) was founded by defense contractors and the Air Force as a “think tank” to “think about the unthinkable.” Their main focus was exploring the possibilities of nuclear war and the possible strategies for such a possibility.

Von Neumann was, at the time, a strong supporter of “preventive war.” Confident even during World War II that the Russian spy network had obtained many of the details of the atom bomb design, Von Neumann knew that it was only a matter of time before the Soviet Union became a nuclear power. He predicted that was Russia allowed to build a nuclear arsenal, a war against the U.S. would be inevitable. He, therefore, recommended that the U.S. launch a nuclear strike at Moscow, destroying its enemy and becoming a dominant world power, so as to avoid a more destructive nuclear war later on. “With the Russians, it is not a question of whether but of when,” he would say. An oft-quoted remark of his is, “If you say why not bomb them tomorrow, I say why not today? If you say today at 5 o’clock, I say why not one o’clock?”

Just a few years after “preventive war” was first advocated, it became an impossibility. By 1953, the Soviets had 300-400 warheads, meaning that any nuclear strike would be effectively retaliated.

In 1954, Von Neumann was appointed to the Atomic Energy Commission. A year later, he was diagnosed with bone cancer. William Poundstone’s Prisoner’s Dilemma suggests that the disease resulted from the radiation Von Neumann received as a witness to the atomic tests on Bikini atoll. “A number of physicists associated with the bomb succumbed to cancer at relatively early ages.” (p. 189) 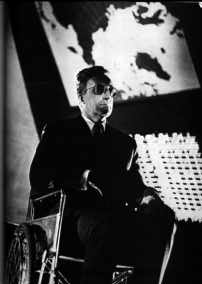 Von Neumann maintained a busy schedule throughout his sickness, even when he became confined to a wheelchair. It has been claimed by some that the wheelchair-bound mathematician was the inspiration for the character of Dr. Strangelove in the 1963 film Dr. Strangelove or: How I Learned to Stop Worrying and Love the Bomb.

Von Neumann’s last public appearance was in February 1956, when President Eisenhower presented him with the Medal of Freedom at the White House. In April, Von Neumann checked into Walter Reed Hospital. He set up an office in his room, and constantly received visitors from the Air Force and the Secretary of Defense office, still performing his duties as a consultant to many top political figures.

Dr. Marina von Neumann Whitman, John’s daughter from his first marriage, was invited by President Nixon to become the first woman to serve on the council of economic advisers.